We have looked at Fibonacci retracement in the previous lesson, drawn between 2 points. But to plot Fibonacci expansion we use 3 chart points.

To draw these levels we wait until the retracement is complete and the currency pair starts to move in the original direction of the Forex trend. Where the retracement reaches is used as point 3. 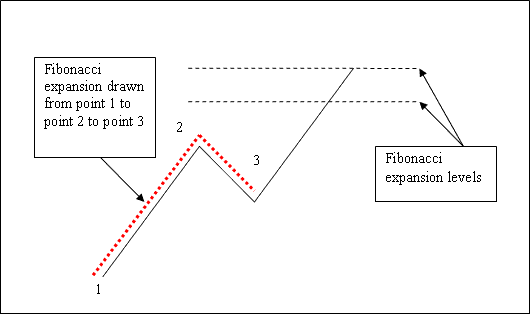 Please note where these levels are plotted - they are drawn above the indicator, these are the points where the trader will set the take profit orders.

These levels are displayed as horizontal lines above the indicator, showing profit taking areas. In the example below if you had used of 100 % extension you would have made nice profit from the trade. 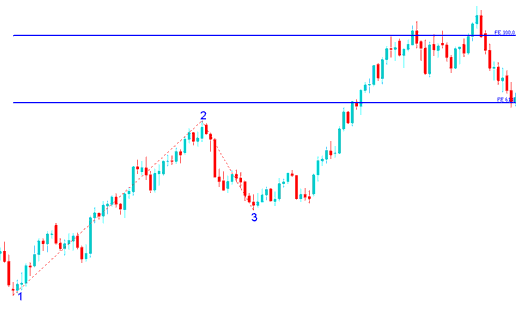 From the above examples, the upward trend continued and both 61.8 % and 100.0 % levels were all hit after which price retraced again after hitting the 100.0 % extension.

Since we use this tool to estimate take profits, how do we draw it in a downward Forex trend?

We plot it from point 1 to 2 to 3 as shown below. Remember we always plot this tool in the direction of the trend. In the example below, can you figure what direction we have drawn it? That is right - downwards.

Try and see the difference between how we have drawn it above and how it is drawn below. This time you would also have used extension level 100 %, see just where the price reached. That would have been a nice take profit area. 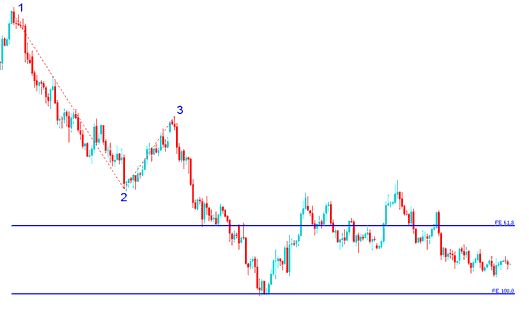 From the example above, after plotting this tool there are two levels that are used to show the profit taking areas, these two are plotted as horizontal lines across the price chart.