When placing carry trades, it is important to look at other factors other than just the interest rates of the currencies before you start.

The one thing you should look at is the trend of the currency pair that you want to carry trade. Looking at the directional bias of the pairs that you are considering is a important because you want to make money from the interest rate differential as well as make profits from your Forex trade, both these factors should always be considered to become profitable.

The reason you look at the trend is because if the currency pair declines more in percentage than the gain you get from the interest, you will still lose money in capital while gaining in interest. This can cause an overall loss even though you are making money on the rates differential.

Factors of This Strategy

With this strategy there are two objectives. These factors are:

Example of This Strategy GBPJPY from 2000 to 2006, difference of 4 percent 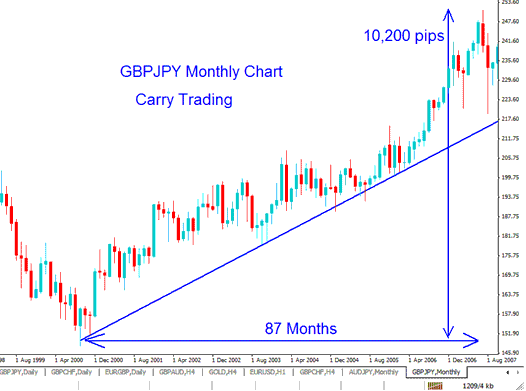 From the above example buying the GBP which paid a higher interest rate than the JPY is what this strategy is all about. The investor was paid was 5% for holding the GBP, the investor also paid 1 % for selling the JPY, This means that the rate difference was 4%(5%-1%). This 4% is what we shall use to calculate the total amount of the profit made from this Transaction.

Even if you did not catch the whole move and only caught half of it you would have made your money, that is why this strategy is very popular.

This was then followed by carry unwinding starting from 2007 and continuing up to the time of the 2008 economic recession, the time when interest for The GBP started to be slashed.

Gain a profit from the capital appreciation

To make money from capital gains we must open positions in the same direction of the trend. From our previous AUDJPY example, to make a carry we should buy the AUDJPY. Therefore the trend of AUDJPY should also be upwards so as to ensure profit from capital gains as well from the interest gains.

If the trend of AUDJPY is a bearish downtrend then you should not open this trade because profits from this strategy will be cancelled out by capital losses brought by the AUDJPY trend going downwards.

If the currency pair appreciates in value, it is a better return on the initial investment. There is a risk involved by not meeting one objective or the other, or both and there is the risk of losing money if these two objectives are not met. Meeting these two objectives for profit on Forex carry and trend movement is a definite strategy to minimize the risks of opening a trade.

These are meant to be long term investments, and the currency can depreciate as well as appreciate. These fluctuations in the forex create risks for Forex.

What is Carry Unwinding

In economic recession, interest are lowered so as to spark growth by increasing liquidity and encouraging trading within the economy, during this time people exit their positions in what is referred to as carry unwinding. This is why it is always good not to use this strategy during economic recession. For example after the 2008 economic recession the GBP rates were revised down to 0.5 % same as that of JPY of 0.5 %, because the difference is Zero, then there was no carry trading of this currency, in fact the investors closed their open transactions, in what is known as Carry Unwinding. This unwinding means that the value of these high yielding currencies move down quickly as they are now yielding close to the same amount and there is no much advantage of holding them.

On the other hand, when there is economic growth, economies hike their interests so as to control inflation. when inflation goes up prices of commodities in that country go up, when the goods of a country become expensive, people from other countries don't buy goods from that country, therefore affecting the trade balance. To counter this governments hike rates, which controls inflation, which ensures positive trade balance for that country. For Example before the 2008 economic recession the AUD rate was about 7.5% against that of JPY of 0.5%, the difference was therefore a 7% positive yield which made this currency pair a very profitable one.

Also when interests are hiked for a particular country, people have more confidence in that currency, because factors show that there is economic growth in that country. In addition the higher, the yields more return, the same concept as that of a bank savings account with higher interest on savings. With an increase on this rate then more investors will add onto their open positions because the currency will simply be yielding more profit that even before.

That is why Forex exchange currencies with high interest rates yield such as the AUD gain more value over the long term because they yield higher returns as compared to those with lower rates yields currencies such as the JPY that yield lower. Investors will look for the pair that has the highest difference between the two interest rates and place their trades using this pair.

The most popular currencies for this type of strategy are those that have the JPY which charges interest as low as 0.5%. The AUD is about 7% and GBP is about 4%, hence AUDJPY and the GBPJPY are the most profitable carry pairs. Another thing to note is that these rates keep getting adjusted by central banks therefore at the time you start it is good to look at the current ones from other online resources.

When there is no economic recessions, the higher yielding currencies will always appreciate, this will yield profits from both capital gains as well as from the trading. This is also the reason why during these times currencies such as AUDJPY and GBPJPY will move in a sustained upward trend for a long time, just like in the above example.

What this means is that now for this strategy instead of 7%-0.5% = 6.5% yield on your open positions, you will get 6%-1%= 5% yield on your position. Some brokers may even implement a higher markup, therefore is you want to use this method look for a broker with low markup. Rates of various currencies can be obtained online from various index tables found online and also from economic calendars online.

Popular Currencies For This Strategy

The most popular pairs for this strategy are the Yen Crosses, These are: