How To Use Support and Resistance to Trade Forex

But what happens when these support and resistance levels are broken, well the levels change one to the other, for example

Using Forex Trading Charts, The Examples Below Show an Illustration of What Happens When These Support and Resistance Levels Break:

Support Level is broken it becomes a Resistance Level

In the example below, using the GBPUSD chart, the support level that had been tested two times could not hold the third time, the sellers were able to push the price down past this support level.

However, the forex price bounced back up again, but this time the price could not go up beyond this line. The price was there after quickly pushed down by the sellers. This was because the line that was a support level had now turned into a resistance level.

In Forex trading when a support is taken out, the stop losses placed below that level are also taken out, thus reducing the momentum that the forex buyers had. This give forex sellers an opportunity to short sell the currency and place their stops just above this level which now turns into a resistance level. 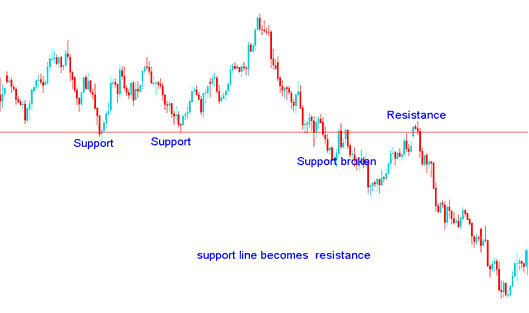 Resistance Level is broken it becomes a Support Level

When the forex price tried to go down again it could not go lower than this level. The forex price was there after quickly pushed further upwards by the forex buyers. This was because the line that was a resistance level had now turned into a support level. This is what happens in Forex trading or stocks trading, when a resistance level is broken it turns into a support level. 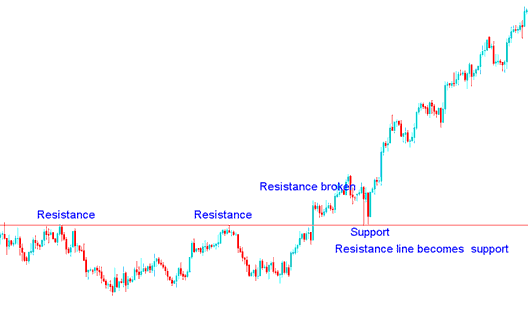 Traders who had closed their short sell trades will now open long trades and place their stop losses just below this level.

In Major Resistance/Support levels price will stay at this level for some time, either the forex price will consolidate at these major support and resistance levels or form a rectangle consolidation chart pattern when price gets to this point. A major support or resistance level will be tested several times before it is either broken or it holds and the forex price does not get to move past this resistance/support level.

The above forex trading examples are good example of major Resistance and Support Levels.

Upward Forex Trend: The pattern of these minor resistance and support levels will form a series of levels whose general direction is upwards.

Upward Trend Series of Support and Resistance in Forex Up Trend

Downward Forex Trend: The pattern of these minor resistance and support levels will form a series of levels whose general direction is downwards. 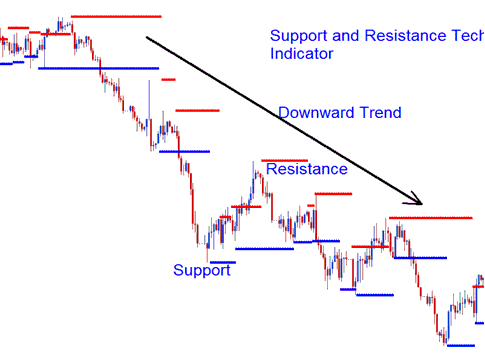