Pivot points is a set of indicators developed by floor traders in the commodities markets to determine potential turning points, also known as "pivots". These points are calculated to determine levels in which the sentiment of the currency trend could change from "bullish" to "bearish." Currency traders use these points as markers of support and resistance.

These points are calculated as the average of the high, low and close from the previous session:

Day traders use the calculated pivot points to determine levels of entry, stops and profit taking, by trying to determine where the majority of other forex traders may be doing the same.

A pivot point is a price level of significance in technical analysis of a financial market that is used by traders as a predictive indicator of price movement. It is calculated as an average of significant prices (high, low and close) from the performance of a market in the prior trading period. If the prices in the following period trades above the central point it is usually evaluated as a bullish sentiment, whereas if price below the central point is seen as bearish.

The central point is used to calculate additional levels of support and resistance, below and above central point, respectively, by either subtracting or adding price differentials calculated from previous trading ranges.

A pivot point and the associated support and resistance levels are often turning points for the direction of price movement in a market.

The central pivot point can then be used to calculate the support and resistance levels as follows:

Pivot points consist of a central point level surrounded by three support levels below it and three resistance levels above it. These points were originally used by floor traders on equity and futures exchanges because they provided a quick way for those traders to get a general idea of how the market was moving during the course of the day using only a few simple calculations. However, over time they have also proved exceptionally useful in other markets as well.

One of the reasons they are now so popular is because they are considered a "leading" (or predictive) indicator rather than a lagging indicator. All that is required to calculate the pivot points for the upcoming (current) day is the previous day high, low, and close prices. The 24-hour cycle pivot points in this indicator are calculated according to the following formulas:

The central pivot can then be used to calculate the support and resistance levels as follows: 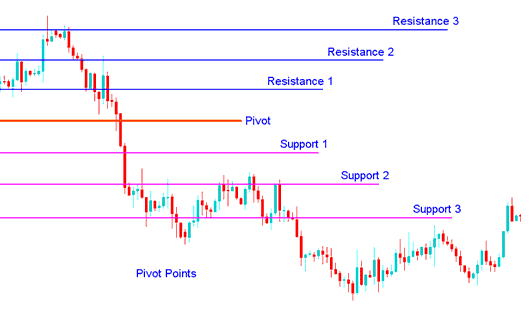 The pivot point itself represents a level of highest resistance or support, depending on the overall sentiment. If the market is direction-less ( range bound ) prices will often fluctuate greatly around this level until a price breakout develops. Prices above or below the central point indicates the overall sentiment as bullish or bearish respectively. This indicator is a leading Forex indicator that provides signals of potentially new highs or lows within a given chart time frame.

The support and resistance levels calculated from the central point and the previous market width may be used as exit points of the open Forex trades, but are rarely used as entry signals. For example, if the price is up-trending and breaks through the pivot point, the first or second resistance level is often a good target to close a position, as the probability of resistance and reversal increases greatly, with every resistance level.

In pivot point analysis three levels are commonly recognized above and below the central point. These are calculated from the range of price movement in the previous trading period and then added to the central point for resistances and subtracted from it for support levels.

Pivot levels can be used in many different ways. Here are a few of the most common methods for utilizing them:

Trend Reversals: In trend reversals, a buy signal occurs when the price moves towards a support level, gets very close to it, touches it, or moves only slightly through it, and then reverses and starts moving in the other direction.

Once you download it open it with MQL4 Language Editor, Then Compile it by pressing the Compile Button and it will be added to your MT4.

NB: Once you add it to your MT4, the indicator has additional lines named Mid Points, to remove these additional lines open MQL4 Language Editor(shortcut keyboard key - press F4), and change line 16 from:

Then Press Compile again, and it will then appear as exactly shown on www.tradeforextrading.com website.