In stock indices trading one of the most crucial concepts is money management; how do you as a trader manage your stock indices account so that you make profits in the long term.

To know about money manage you are required to know the following concepts as a trader.

Drawdown is the amount of money you can lose on a single trade in stock indices trading.

As a trader if you have $10,000 dollars in your account and you open a trade, and the trade makes a loss of $1,000 dollars from one single trade your drawdown is:

Maximum drawdown is the total amount you have lost in your account before you start making profits.

To better manage your money as trader it is best to keep this drawdown per trade to a minimum. The recommended is 2 % draw down per trade. This way as a trader you will control the risk per trade and also minimize the maximum drawdown. 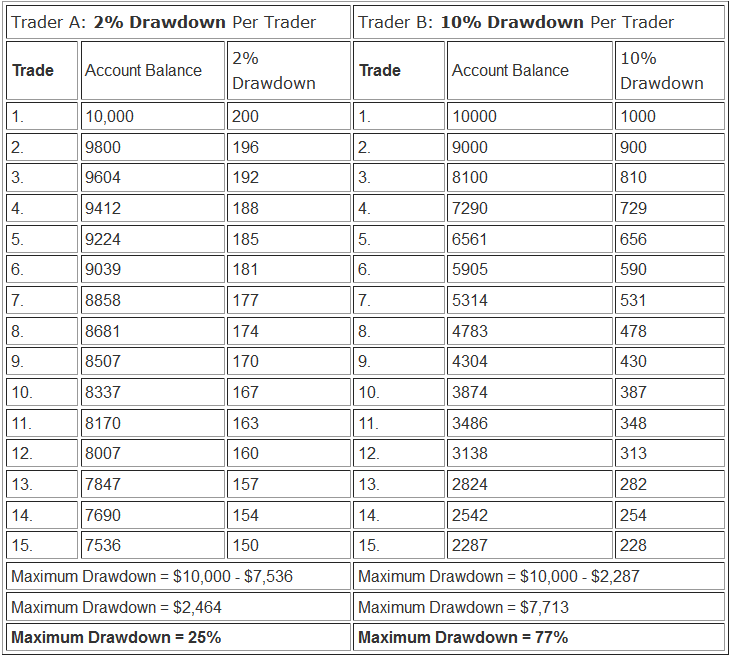 This illustration although it is nearly not possible to have a losing streak of 15 consecutive trades in a row, shows that using 2 % drawdown will preserve your capital and help keep you in this trading game for longer and you will be more likely to make profits in the long term.

This is also because it will be easier to break even if you only lose a little of your capital rather than losing most of your capital, as shown below:

The way break even is calculated in terms of percent is:

From these examples above the more the maximum drawdown the harder it is to get back to break even and to make profits.

This is why it is best to use 2 % risk drawdown so as to keep your drawdown and maximum drawdown to a minimum and this way improve your chance of making profits in the stock indices trading market.