The risk appetite is a strategy that is used when there is economic boom; in this strategy is where the traders will buy high yielding currencies like EUR and GBP and sell lower yielding ones like USD and JPY.

Risk Averse is a strategy that traders use during economic recession time; in this strategy the traders will sell the high yielding currencies in favor of buying safe haven ones such as USD and JPY, and safe haven commodities such as Gold.

Speculation and Trading With This Strategy

Risk Appetite is used to determine the general market sentiment, speculative traders will then use the current sentiment to determine which currencies to trade and which direction to trade.

We shall look at a few examples that try to explain the general market direction of a currency in relation to another. Also we shall look at example of commodities that are also now traded in the Foreign Exchange Market.

Risk Appetite has two sides, these are:

USD and JPY on the other side

In Economic boom time, the interest rates for these may go as high as 6% for Australia Dollar and between 3 and 5 % for Euro and GBP. This means that at the end of the year for traders holding these in their investment may go up by 6%, Now this is Forex trading there is leverage, take a low leverage of 10:1 and the 6% percent now becomes leveraged 10 times, now return on investment is 60%. This is a strategy used by hedge funds that buy currencies and hold them for years.

For example the image below, shows the GBP when its Interest rate was about 4.5 to 5 % and this helped fuel risk appetite one of the factors being that this was a higher yielding currency. This made the GBP to go up about 10,200 Pips (102,000 Pippetes, if using the 5 decimal points quoted by brokers of now, that time it was 4 decimal quotes). This is equal to 102 cents, or 1.02 dollars. 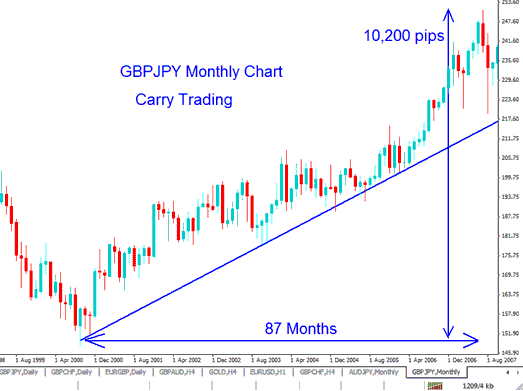 When there is risk appetite:

NZD may also be added onto the list of higher yielding currencies because it is also one that has a high interest rate - therefore traders may also trade NZDUSD and NZDJPY as bullish.

In economic recession risk appetite becomes risk averse, traders and investors start closing their position in these higher yielding currencies and start flocking to US Dollar and also Gold; Why?

US Dollar is the most stable currency worldwide, held as reserve by most banks and central banks all over the world, thus US Dollar would still be the last currency standing as it is the most hardest to dispose as everyone, every corporation, every commercial bank, every central bank has it. So in recession time when there is uncertainty, those who know, the economists would rather be holding on to USD rather than any other. This is known as Safe Haven; The USA Dollar is a safe haven - in times of economic recession traders will flock to the safe haven currencies – the USD. Therefore the value of USA Dollar will keep going up in times of recession. The more the recession the more the US Dollar gains value, even if the Recession is hardest in USA, US Dollar will not lose value because of this, US Dollar will gain more and more value, because it is the safest option. Vice Versa, if US Economy does very well, people will lose the dollar in favor of others that are higher yielding. That is why when the US economy is doing good and also all other Economies are doing good, other currencies such as GBP, EUR, AUD will gain on the USD, the USA Dollar might even lose value against these higher yielding currencies.

It is because of this reason that when recession hit in 2007, risk appetite became risk averse and the above investors closed all their buy positions and they started favoring buying the JPY and the USD which gained back all the value. 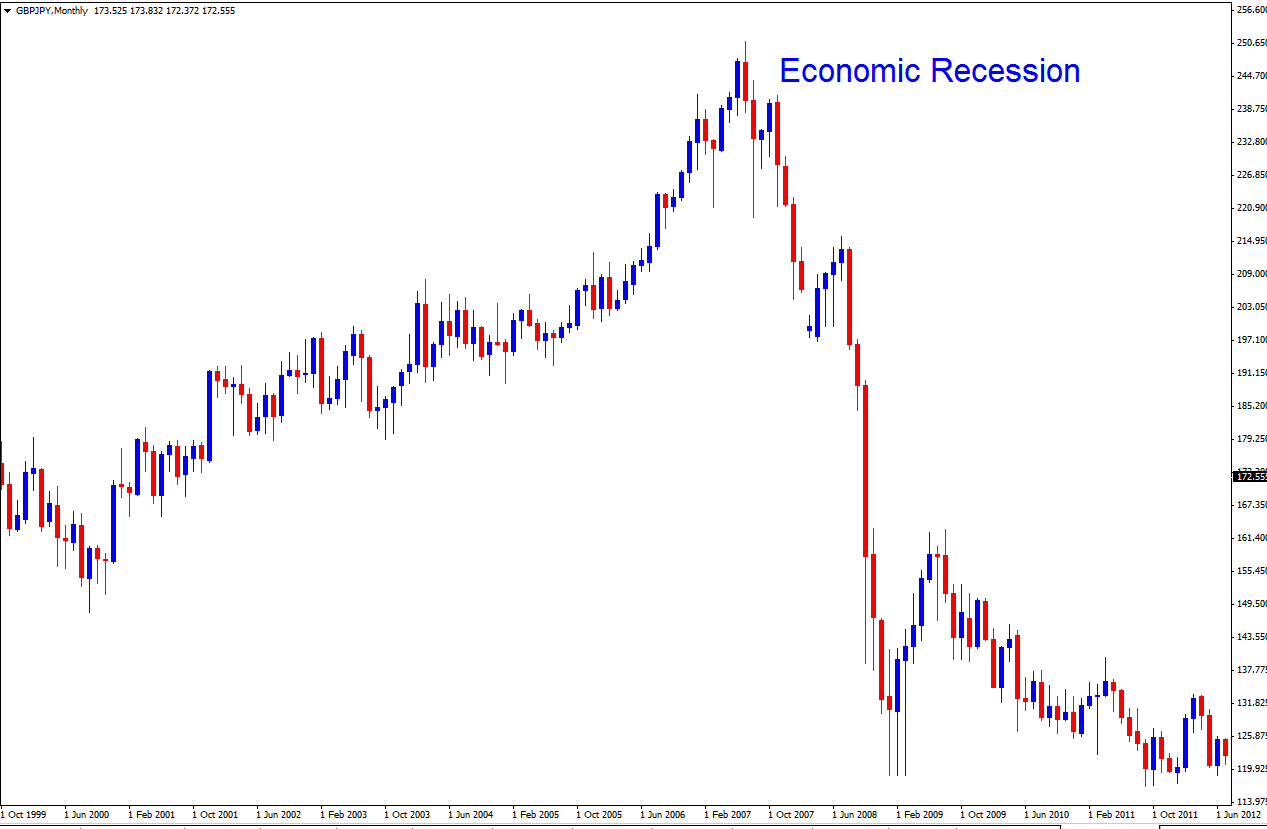 The JPY – Japanese Yen is also in the same category of Safe Haven Currency and will generally follow the same pattern with the USD, in economic boom other currencies gain value on JPY, in recession time people flock to the JPY, because of its safe haven status.

Gold, Silver on one side

USD on other side

Gold is used by central banks as reserve and as a value holder to back up the value of their currency. Most central banks will hold gold reserves of a similar value to the total amount of money in circulation within their economies. This is because every unit of legal tender in an economy must represent value, either the same value as all the goods and services within that economy and not exceed this, otherwise inflation ensues. Sometimes, central banks will also decide to back up the amount of money in circulation using gold reserves.

Because of the above, Gold is considered as a safe haven, this time not as a currency but as a commodity. In recession time when people are risk averse, people will keep buying Gold and drive its prices higher, because it is a safe haven commodity.

During 2007 Recession, the traders and investor started becoming risk averse and started to buy Gold, at that time it was also offered by Forex Brokers as a trading instrument, meaning that more people participated in the Gold trade by buying contracts online and holding the value in form of contracts rather than holding the physical metal, this meant even more trade transaction for Gold and its prices went sky high with investor opting to hold value in form of this Commodity Metal. 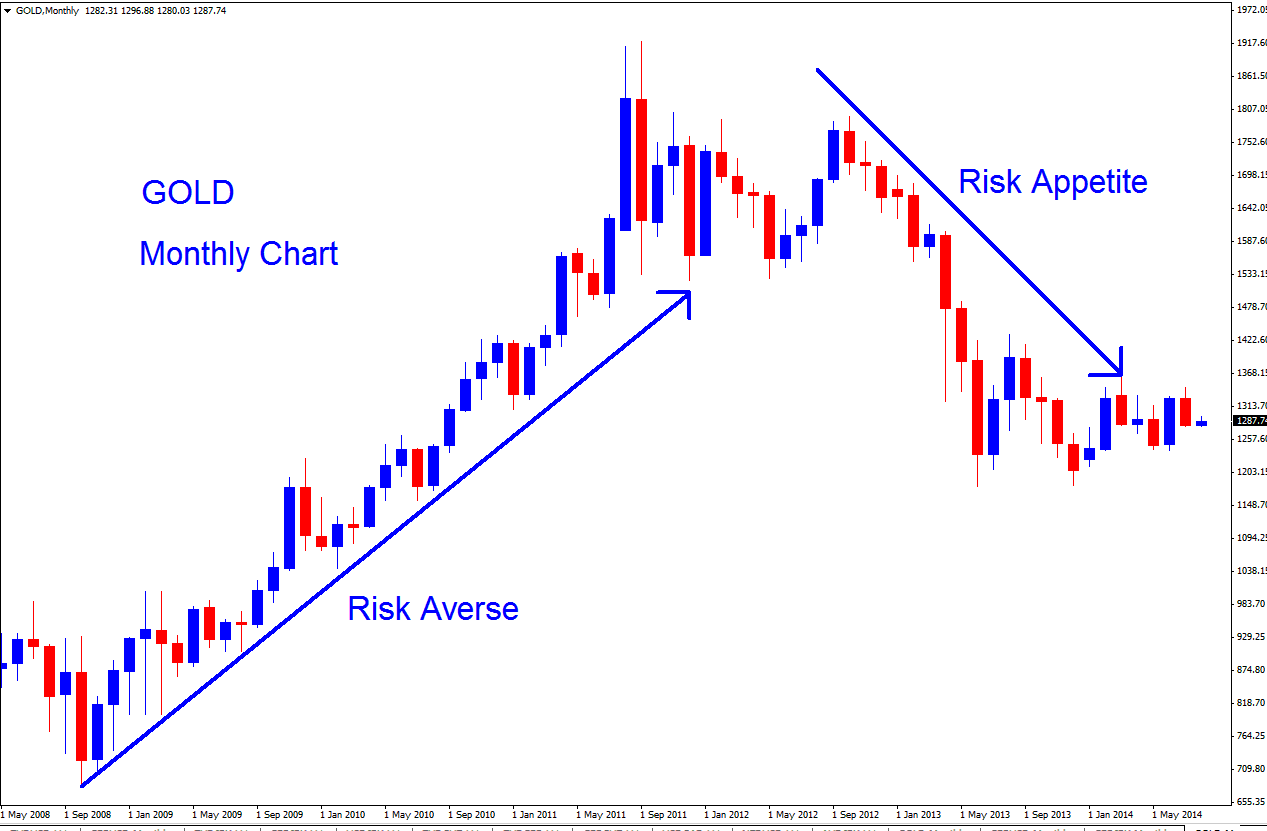 After signs of Economic Recovery in 2012, investors stopped being risk averse, started to have appetite for risk, Started selling off the Gold Contracts in favor of now positioning themselves to buy higher yielding currencies, because the Economies were showing signs of recovery therefore soon there would be less risk in holding higher yielding currencies that give more return on investment. As more and more traders stopped being risk averse and developed an appetite for risk the more these traders closed their Gold Positions driving the price of this commodity further down.

However: Gold may also gain in value due to demand of the commodity when there is economic growth because people may start buying more jewelry. Therefore, Gold may not necessarily follow this sentiment of risk appetite and risk averse all the time.

When there is risk averse:

NZD may also be added onto this list - therefore traders may also trade NZDUSD and NZDJPY as bearish.

Commodity Oil is the Opposite of Gold

Economic Boom – Prices of Oil go up because there is more demand for Oil as Economies expand people have more to spend either factories are producing more using more energy and more and more people buying vehicles demanding more fuel.