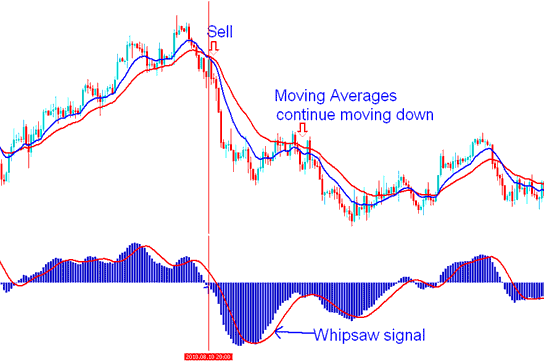 A forex whipsaw signal is as a result of dramatic rise and fall in the price in a short time and in such a manner that skews the data used in calculating the moving averages that plot the MACD forex indicator data. These types of whipsaw moves are usually brought about because of some news event that can produce market noise.

Forex traders should have the ability to gauge a forex whipsaw and withstand the whipsaw; a forex trading whipsaw might result into an upswing session and then a downswing session. To minimize the risk of trading forex whipsaws, it's good to wait for confirmation of forex signals by waiting for MACD to cross above or below the zero center-line mark.

When a buy forex signal is generated in a bearish territory, it might result into a whipsaw especially if it is not followed soon by a MACD center line crossover.

In the example below, MACD forex indicator gives a buy forex trading signal even though it is in bearish territory, the MACD indicator then turns downwards and starts moving down again resulting into a forex whipsaw. By waiting for center line crossover it is possible to avoid the whipsaw.

However, in this case there was a brief center line crossing; this forex whipsaw would have been hard to trade using this MACD forex indicator alone, that is why it is good to combine the use of MACD indicator with another forex technical indicator. In the example below MACD is combined with the moving average forex indicators technical analysis. 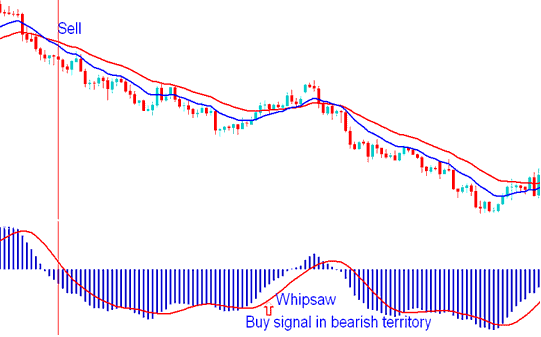 When a sell forex trading signal is generated in a bullish territory, it might result into a whipsaw especially if it is not followed soon by a MACD center-line crossover.

In the example below, the MACD forex indicator gives a sell forex trading signal even though it is in bullish territory, the MACD forex indicator then turns up and starts moving upwards again resulting into a forex whipsaw. By waiting for center-line crossover it is possible to avoid the forex whipsaw. In the example below by combining this MACD indicator with the Moving Average Crossover Forex Trading Strategy you would have avoided this whipsaw. 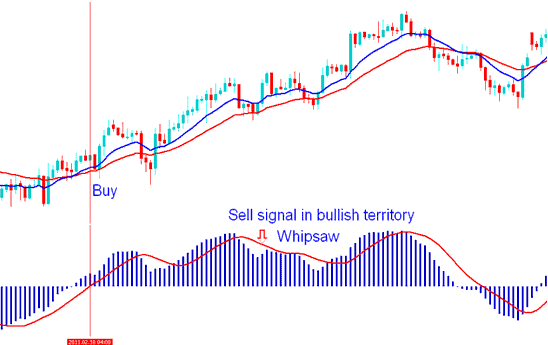 To avoid forex whipsaws completely when trading the forex market with this MACD Indicator it is best to use the Center-line Crossover Signal as the Official Buy or Sell Signal of The MACD Forex Indicator.